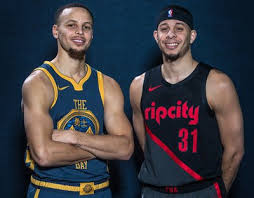 For most NBA basketball fans it’s not surprise that Golden State Warriors won this series and will go to 5th consecutive NBA Finals in a row.

“The last time an NBA team went to five straight NBA Finals was the Boston Celtics, led by Red Auerbach, Bill Russell and John Havlicek during the 1965-66 season.”

Anyway, after KD/Cousins and later Igoudala were out there was a flair that it won’t be easy Western Conference Finals for Steve Kerr’s team.

We won’t talk about Curry’s unbelievable performance and fact that Warriors ball-movement offense without ISO works excellent. Warriors have won 31 of their last 32 games without Kevin Durant…

If it’s only about offense I am 100% sure that there shouldn’t be 4:0. How to stop so far in Play-Offs great playing Lillard and McCollum was the question and Warriors had an answer!

#1. Heavy workload for Lillard. Damian Lillard is NBA player who played the most minutes this season (regular season + play-offs) 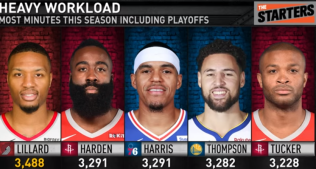 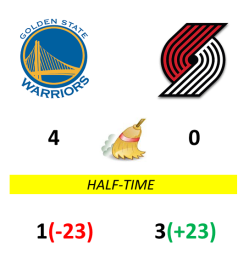 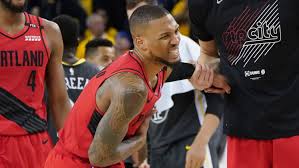 #5. Portland’s defensive strategy in G1 allowed Curry to get many wide open looks and once world’s best three-point shooter find his offensive rhythm, it won’t be long Play-Off series for opponents.

#6. Portland has generated 18 more open or wide open 3-point attempts than Golden State in this series, but have just one more 3-pointer made on those shots through three games. (After 3 games).

Actually Warriors also could have lot of ”excuses” if things not going their way.  My opinions – there should be at least 1 victory for Trail Blazers, despite Warriors great performance.

THE KEY IS TO STOP PICK-AND-ROLL. 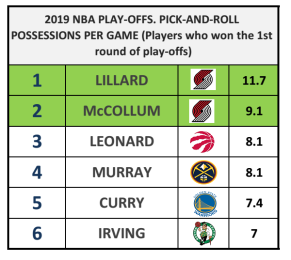 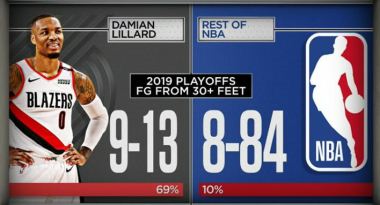 Ball out of Lillard’s & McCollum’s hands + deny pass back (don’t let the ball to get back to Lillard and McCollum).

Let others play 4vs3. Especially if Nurkič out and Turner/Kanter/Leonard/Harkless not that effective in short roll situations vs. Warriors (decision making)?

Harkless and Aminu also should take advantage of 4vs3 situations, it wasn’t the best series for both of them.

It’s risk but… if other teammates can’t play 4vs3 effective? That’s calculated risk and it makes sense.

There will be few examples of Dubs successful aggressive defense vs. Lillard & McCollum.

Warriors defenders TRAPS Lillard. Kanter (5) short roll (elbow area). In 2 seconds he has to make a play because his defender is ready to recover after the ball is passed out of trap. Usually xA helps so x5 can recover back to 5 (also full rotation option is possible) but since Aminu (A) is not great 3-point shooter he is left in the corner completely open and it allows xA (Green) to make the most appropriate decision. 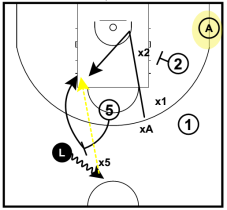 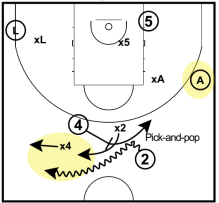 Excellent team defense that allowed to TRAP McCollum and within 2 seconds being from 3vs4 disadvantage to be back not only to 5vs5 situation but even 5vs4! 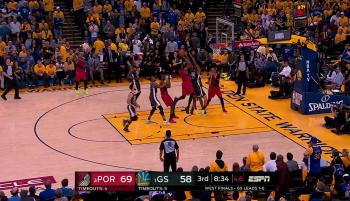 Ball out of McCollum’s hands + pass to Turner + floater from free-throw line area. Turner’s floater is shot what Portland prefers instead any type of shot from Lillard or McCollum.

Of course no strategy is perfect. If you trap pick-and-roll or trap player with ball once he crossed half-court line you give up something.

Great example when screener’s defender is just 1 second late or not aggressive enough… It can cost 3 points since Lillard can score from very long distance.

Not always Warriors were able to cover 4 vs 3 situations perfect after ball was passed out of trap but their plan worked well  – ball was out of Lillard’s and McCollum’s hands (tons of missed wide open threes and bad decision making from other teammates helped Warriors).

If you or your child wants to improve their basketball skills and basketball IQ contact me privately.  Beijing A+ BASKETBALL.

This is a text widget. The Text Widget allows you to add text or HTML to your sidebar. You can use a text widget to display text, links, images, HTML, or a combination of these. Edit them in the Widget section of the Customizer.